Hanson is one of the world’s largest suppliers of heavy building materials to the construction industry, producing a range of building products including concrete pipes, concrete pavers, tiles and clay bricks.

Their use of Ultralite™ within the construction of the kiln cars demonstrated a major advantage over the previous fibre / vermiculite construction in terms of its thermal efficency.

Ultralite™ is a unique lightweight refractory material that has excellent thermal insulation properties. Its thermal characteristic is now proving itself within the Tableware, Sanitaryware and Brick Manufacturing industries saving significant energy and costs associated with the overall kiln operation.

Ultralite™ is designed to replace the more traditional insulation material within kiln car bases without any of the growing concerns about the health and safely implications of ceramic fibres. Ultralite™ is now a real alternative choice for the discerning manufacturer.

An Overview of Hanson 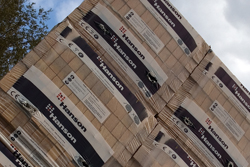 Hanson is one of the world’s largest suppliers of heavy building materials to the construction industry, producing a range of building products including concrete pipes, concrete pavers, tiles and clay bricks. Hanson’s UK business has an annual turnover in excess of £1.8 billion. The company operates over 400 manufacturing sites and employs more than 9,000 people. Its building products division has 55 production sites and is one of the largest producers of clay bricks and aircrete blocks in the UK.

Hanson manufacturing facilities utilise tunnel kilns in the manufacture / firing of clay bricks, this production process is energy intensive, therefore improvements to its energy effectiveness was a key initiative for Hanson at its Desford manufacturing works in the UK. This case study demonstrates the energy saving improvements that are possible by deploying Ultralite, a UK insulating technology.

The standard kiln car construction consisted of a base of Expanded Fireclay Grog (EFG) Castable to a thickness of 50mm, topped with a layer of Vermiculite castable to a depth of 185mm. This was then capped with a layer of refractory ceramic fibre on which was placed a number of setting deck tiles. These tiles were supported by dense castable support posts, which extended from the base of the car. See Diagram 1.

The initiative focussed on several kiln car problems, including the ‘setting’ or ‘placing’ sand permeating down between the cracks of the decking tiles and, having nowhere else to go, gathered between the tiles and in the cracks of the Vermiculite castable. With the constant expansion and contraction during firing, this resulted in growth in the physical dimensions of the kiln car, to the extent that it would not fit into the kiln opening.

This presented various maintenance problems for Hanson. One being the necessity to dis-assemble the top of the kiln car, clean up the sand debris, replace the insulation and then re-assemble. This had the added disadvantage that the ceramic fibre needed to be disposed of in a controlled waste skip. Given the size of a kiln car base is typically 8m wide x 4m long, and the number of cars in a kiln is between 50 and 150, then the maintenance issue becomes extremely costly and a priority for the kiln management team.

In an attempt to alleviate the kiln car problems, various types of configuration were attempted. During the course of investigating alternative materials, Hanson was introduced to Ultralite, a new UK loose fill insulation technology.

Hanson concluded that the only way forward was to re-construct the kiln cars. The new construction consisted of a base layer of Ultralite castable to a thickness of 50mm, which was also used to secure the setting support posts. On top of the castable layer was poured Ultralite loose fill insulation media, which in turn was topped off with the deck tiles. See Diagram 2.

Major Benefits Resulting from the use of Ultralite

The use of Ultralite™ demonstrated a major advantage over the fibre / vermiculite construction in terms of its thermal efficency. This has led to a significant reduction in undercar temperature from typically 150°C to less than 80°C.

Hanson concluded that the lower the undercar temperature, the less maintenance on wheel bearings. The reduced undercar temperature has meant that the replacement cycle of the bearings has been extended from 12 months to 3 years. Hanson commented that this is often due to wheel wear rather than bearing failure, further, lubrication of the bearings was reduced typically from once per firing to three times per annum!

The other key observation was that the cars themselves were significantly cooler to the touch, resulting in the operator being able to unload the bricks earlier and without the associated Health and Safety issues.

In a traditional kiln car, heat transfer occurs naturally through the base of the car at a constant rate. The degree to which this occurs is dependent upon the insulation material, the hot face temperature and the base construction.

Air is a good thermal insulator, so materials that trap air like Ultralite™ have exceptional characteristics for insulation. As clearly shown by the micrograph of Ultralite™ (above), there is a high proportion of air open space within the structure, resulting in the necessary low solid densityrequired. This means that the heat transfer through the material at elevated temperatures is significantly less than that of traditional insulation materials resulting in energy savings. 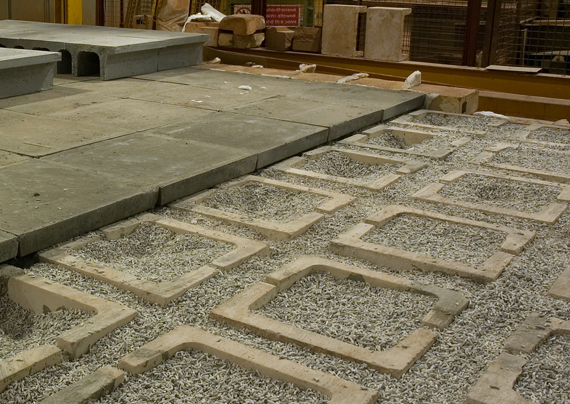 Improvements in Cost and Energy

To measure the differences in temperature over time within the kiln car base, detailed “before and after” analysis was carried out utilising a data logger with four thermocouples.
The thermocouples were positioned i) Just above the cover tiles, ii) just below the cover tiles, iii) at the bottom of the cavity and iv) directly underneath the car.

The graphs below show the plotted temperature for each thermocouple prior to the modification and then for the new kiln car construction. From the graphs, the following was observed.
In the original construction, thermocouple 3 (shown in green) demonstrates that the car took considerable time to heat and in the process absorbed significantly more heat. It also clearly demonstrates that it took a longer time to cool, due to the much denser heat sink. This resulted in more energy being consumed. 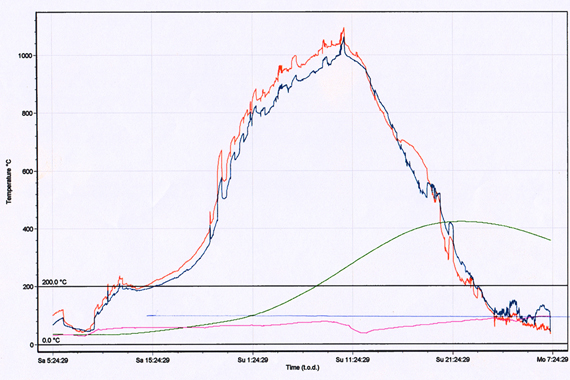 A further indication of the amount of heat being absorbed by the car is the line representing the temperature on the underside of the cover tile (shown in blue in Graph 1 above). It almost follows the profile of the line representing the temperature above the deck tile (red line). The graph also shows the under-car temperature (pink line) is still on an upward curve after exiting the firing zone due to the mass of heat still retained within the kiln car base.

Graph 2 shows the results recorded from the new Ultralite initiative. The red line is significantly smoother, representing a more consistent & even temperature increase. The lighter mass means that the kiln quickly attains its optimum temperature & also cools more rapidly from the peak
firing temperature to the end of the firing cycle. The under-car temperature (shown in green) is notably lower, indicating a reduced mass of heat being absorbed into the kiln car base. 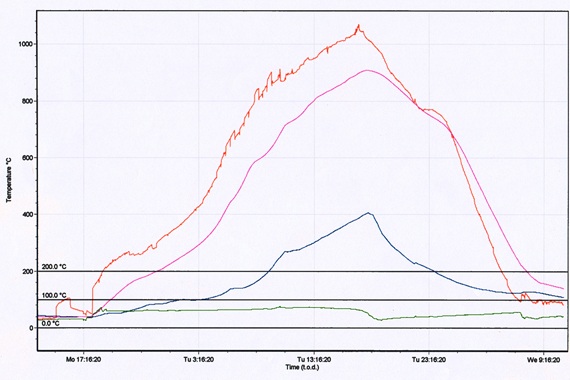 The lighter mass of Ultralite means that the material has the ability to give up its heat more readily, unlike the original, more dense material, which retained the heat until well after the end of the firing cycle. Hanson now use this to great advantage as part of a Heat Recovery process. Cold air is passed across the bottom of the kiln cars and this air absorbs the latent heat which is given up from the Ultralite base. This heated air is then channelled back into the brick dryers, with no need for any additional heat input. This has resulted in another significant cost saving for Hanson. Prior to the introduction of Ultralite into the kiln cars, it was necessary to use supplementary energy to heat the air for the dryers.

To support the Hanson conclusions, ‘Static Heat Flow’ calculations were carried out using industry standard computer programs, which have been specifically developed by The Institute of Materials in conjunction with Ceram. Comparisons were drawn between the original kiln car construction versus the Ultralite™ ROK loose fill material. The results clearly demonstrated that the amount of heat stored in the kiln car base, combined with the heat-flow through that base was 26% less with the Ultralite™ construction, resulting in a corresponding energy saving to the kiln car base.

If you would like to benefit from the use of Ultralite™, please contact Mantec Technical Ceramics Ltd.

Ultralite in the Brick Industry

This website uses cookies to improve your experience. We'll assume you're ok with this, but you can opt-out if you wish.

Any cookies that may not be particularly necessary for the website to function and is used specifically to collect user personal data via analytics, ads, other embedded contents are termed as non-necessary cookies. It is mandatory to procure user consent prior to running these cookies on your website.